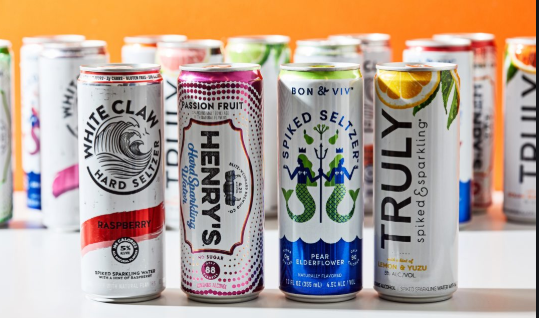 It seemed as if everywhere you turned this summer, from backyard barbecues to concerts and the beach, there was a spiked seltzer in someone’s hand. With its low ABV and calorie count and creative flavors, spiked seltzers exploded.  Seltzer is perceived by many as a healthier alternative beverage.

Seltzers now comprise about 6 percent of all beer sales by dollars.  For the month of August, seltzer sales rose by 182 percent, compared to August 2018.  The number one seltzer, by far, is White Claw with roughly a 60% share of the total seltzer market.  Truly is a strong second at 26% and no one else is close.  White Claw is made by Mark Anthony Brands, the same company that makes Mike’s Hard Lemonade, while Truly is a product of Boston Beer (the parent company of Samuel Adams).  White Claw and Truly are distributed statewide by N.C. beer wholesalers.  White Claw sales have been so red-hot that there has been a shortage in U.S. markets this summer.

Meanwhile, brewers of all sizes are rushing new seltzer products to market.  Anheuser-Busch has already launched Natural Light Seltzer to go along with its previously-released Bon & Viv, and A-B has snagged comedian Trevor Wallace as a spokesman.  Wallace is the same guy who made a funny White Claw video this summer that went viral.  Heineken and Constellation (makers of Corona) also have seltzer products in the works as do a host of small brewers.

Seltzer mania has been a big blessing for the beer industry.  Seltzers are a malt beverage product so they are classified and taxed the same as beer.  So, if people are drinking more seltzer, what are they drinking less of?  While there may be some drop-off in traditional beer sales, there’s substantial data to show that seltzers are being viewed by drinkers as an alternative to vodka & soda as well as white wine.

How long will the seltzer craze last?  No one really knows.  It’s likely fall and winter weather will cause a seasonal decline.   U.S. seltzer sales are expected to hit 65 million cases by the end of this year and beverage consultant Bump Williams predicts that U.S. seltzer sales will triple between now and 2021.  We shall see.