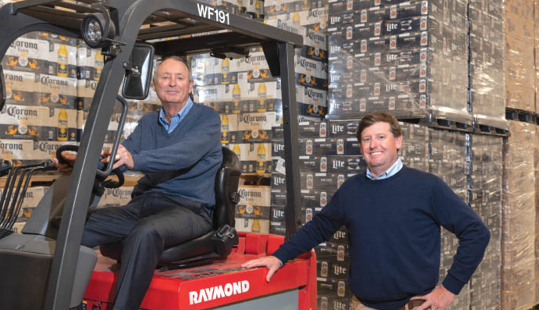 But first you’d have to maneuver through a maze of white hallways and open locked doors with a special card. And be careful not to take a wrong turn into the giant, cold storage facility that’s kept at 38 degrees.

But by then you’d probably know where you were. Smack dab in the middle of Coastal Beverage Co. (CBC) headquarters.

And one of the first people you’d meet at the front door is CBC president Tee Nunnelee.

As a beverage and hospitality professional, Nunnelee is faithful to both industries from the get-go. Wearing a big smile and raising a shiny insulated tumbler to show the way, he’s dressed in khakis, a button-down dress shirt, a blue knit sweater and running shoes.

CBC’s front lobby at 461 Corporate Drive off U.S. 421 in Pender County is spacious, linear and clean. And new.

A property search began in 2017, eventually leading to CBC’s purchase of a 27.7-acre parcel at the Pender Commerce Park. Construction began in late 2018, and in September this year, about 220 employees moved into the 162,000-square-foot facility.

A hospitality suite, an employee fitness center and a dedicated space for sales are a few of the functional and aesthetic perks. They were also a further show of commitment by the Nunnelees to company culture and employee retention.

“We pride ourselves on being a big family,” said Nunnelee. “Like my grandfather and father, my door is always open.”

Today, the beverage purveyors have service centers in Wilmington, Farmville and Elizabeth City, with retailers in 38 counties and distribution rights for brands such as Miller- Coors, Constellation, Yuengling, Pabst and Heineken, as well as wines and non-alcoholic beverages.

“We have 1,600 beer SKUs and 400 wine SKUs,” says Nunnelee. A stock keeping unit, or SKU, is an inventory-tracking number used to identify the price, product options and manufacturer of a given product. SKUs at CBC also exist for hard seltzers like White Claw and the energy drink Red Bull.

Nunnelee pulls a white, plastic access card from his pocket and opens a door into high ceilings, rows of heavy-duty industrial shelving and cement floors.

“The sales team inputs orders electronically, and the warehouse compiles them,” he said. “I think of the warehouse as our ‘special teams.’”

Then beeping forklifts take over loading cases of product into delivery trucks for distribution to about 5,000 North Carolina retailers like Harris Teeter on Oleander Drive.

The company warehouse is where it all began for Nunnelee, eventually working his way to delivery (he still maintains a Class A commercial driver’s license) and then sales (named a regional sales manager in 2013), ultimately being promoted to president of CBC in 2015.

“My father [Tuney Nunnelee] stressed upon me the importance of learning every position within our company and that it would behoove me to work my way up if I wanted a successful career at Coastal,” Nunnelee says.

To further stay ahead of the competition, CBC rebranded in 2016. True to its name, the “look and feel” of the logo (a custom font was created) and color palette (blue, teal and sepia) are reminiscent of coastal life. Chill beachgoers, bottled beer, a guitar and hazy sun.

Most recently, CBC acquired Wilmington-based Atlantic Shores Distributors in February of this year. Before that, 1999 proved an especially effervescent year with the acquisition of five distributors.

Nunnelee keeps track of where the beverage industry’s been and where it’s going.

“The population’s drinking preferences and habits are more and more changing,” says Nunnelee. “Back in the day, folks may have stuck with the same beer their whole life.”

In some ways, it’s the perfect combination of views for Nunnelee – past, present and future.

Now all he needs is a drink in his hand